What does corpora say?

Greetings all, in this small article I thought we should look at what does the SCAs guiding document Corpora say about peerage in general and the order of the Pelican (OP) in particular. The Corpora is the guiding document of the SCA it contains all the basic stuff on structure, conduct, rules etc that are used as a guide for how the SCA works and is run.

We look under section VIII

A. Patents of Arms

1. General Requirements
Candidates for any order conferring a Patent of Arms must meet the following minimum criteria. Additional requirements may be set by law and custom of the kingdoms as deemed appropriate and necessary by the Crown.

a. They shall have been obedient to the governing documents of the Society and the laws of the kingdom.

b. They shall have consistently shown respect for the Crown of the kingdom.

c. They shall have set an example of courteous and noble behavior suitable to a peer of the realm.

d. They shall have demonstrated support for the aims and ideals of the Society by being as authentic in dress, equipment and behavior as is within their power.

e. They shall have shared their knowledge and skills with others.

f. They shall have practiced hospitality according to their means and as appropriate to the circumstances.

g. They shall have made every effort to learn and practice those skills desirable at and worthy of a civilized court. To this end they should have some knowledge of a wide range of period forms, including but not limited to literature, dancing, music, heraldry, and chess, and they should have some familiarity with combat as practiced in the Society.

h. They should participate in Society recreations of several aspects of the culture of the Middle Ages and Renaissance. March 3, 2021 Revision

2. Order of Precedence Within the Peerage

The Crown may establish the order of precedence within the peerage according to the laws and customs of the kingdom. However, the Chivalry, the Laurel, the Pelican and Defense are of equal precedence and must be considered as one group.

3. Departure from the Peerage

Any member of an order conferring a Patent of Arms may resign from that order. To leave a Patent Order, the member must send a written resignation to the Crown, the Principal of the Order (if any), the Principal Herald, and the Board. The Crown bestows membership in Patent Orders. No ‘interchangeability’ exists from one order to another (as Knight to Master or Laurel to Pelican), and the acceptance of a person who has so resigned an order into any other order is solely at the discretion of the Crown according to the laws and customs of the kingdom.

The following institutions are established for all kingdoms in the Society. A Patent of Arms may be conferred only upon a person being admitted into one of these orders. Each candidate for a patent order must satisfy the general requirements listed above in A.1., as well as the specific requirements listed here.

c. The Order of the Pelican.

(i) Members of the Order of the Pelican may choose to swear fealty, but are not required to do so. The candidate must have attained the standard of service to the Society or any of its branches equal to that of his or her prospective peers, which is above and beyond that normally expected of members of the Society.

(ii) The duties of the members of the order are as follows:

(a) To set an example of courtesy and chivalrous conduct.

(c) If in fealty, to support and uphold the Crown of his or her kingdom.

(d) To enrich the kingdom by sharing his or her knowledge and skills.

(e) To advise the Crown on the advancement of candidates for the Pelican.

Members of the Order of the Pelican are granted the use of the title of Master/ Mistress in masculine/ feminine/ collective as the standard. If a member is looking for a version that is more related to their persona the College of Arms publishes a more extensive list of titles and alternative forms, which may also be used freely by qualified persons. In addition, the College of Arms has full approval authority over new alternative titles, which must be added to their list before being released for use in the Society.

You can find the Corpora in the online library of governing documents.
Document Library – SCA.org 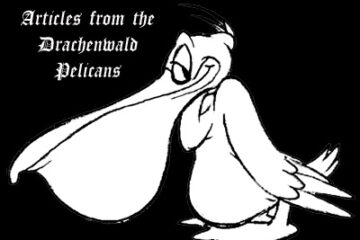