About
I found a pamphlet about the SCA at the local tourist office in Skara in 1989. It sounded like fun, so I joined, and have stayed since. I started out in Ulvberget (Skaraborg) in Nordmark, found a group of friends, and autocrated a lot of events before I even finished high school! I did a lot of 12th and 13th centuries in my early days, but nowadays I’m all over the place. I like the SCA because of the people, the romantic ideal about the middle ages and the opportunity to leave the boring everyday life behind for a couple of hours.

Service you have done
I’ve been autcrating like crazy, and then I met Elffin from Lochac and we became the first king and queen of Drachenwald in 1993. That was such a crazy experience I needed to do it again, and thus Elffin and I became the first duke and duchess of Drachenwald in 1997. I have served as seneschal of Nordmark, and been a board member for too long. I’ve been herald of Nordmark, seneschal of Ulvberget, even Gold Key for a while. A typical “helium hand” in any society, and I’m in lots of different associations.

Doesn’t like
Bureaucracy. It even has “crazy” in it!

Stuff she wants to see at events
Friends, old and new!

Anything else you want to say
Being part of an association like the SCA can be a gift. This is a place to grow, to find friends, to learn things and to be good at them. Never let something like that be a burden to you, take a break when you need to, and come back when you can.
This is not the whole world. It’s just a yummy piece of the cake. 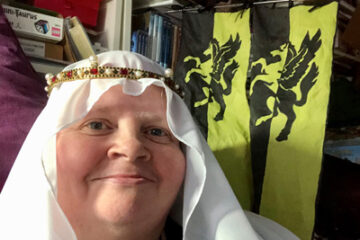 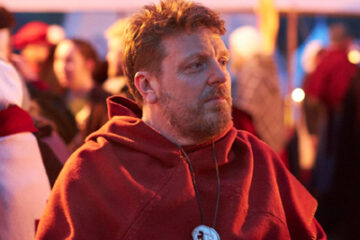 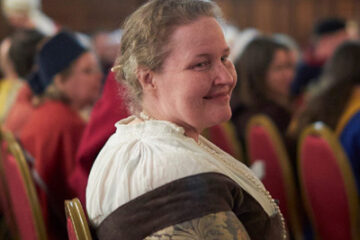